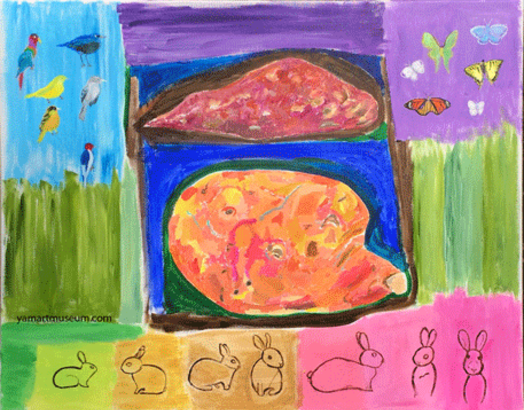 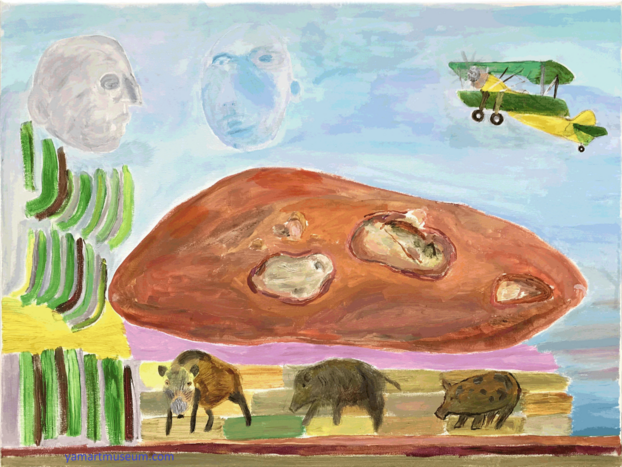 A big yam with a flat bottom and pronounced orange mouth.  Shaped very much like a whale.  Sept 2015  11x14 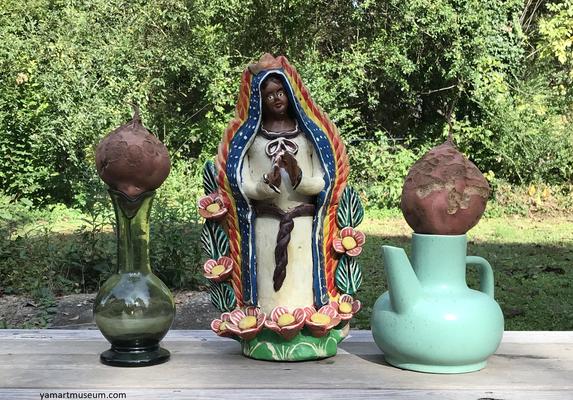 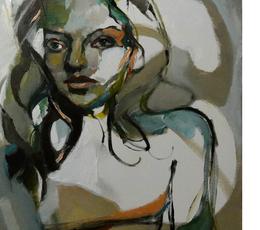 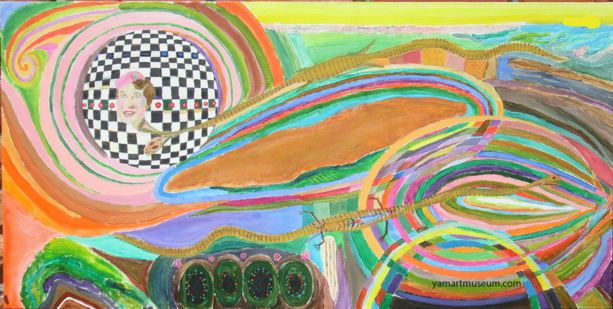 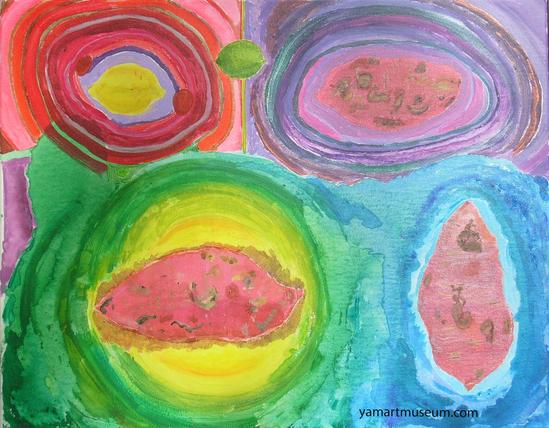 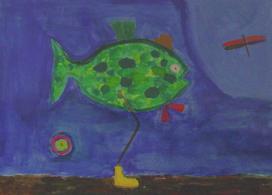 Yams are accompanied by citrus fruits.  My friend Ben the art critic sees this yam moving backwards in time to the dawn of creation. 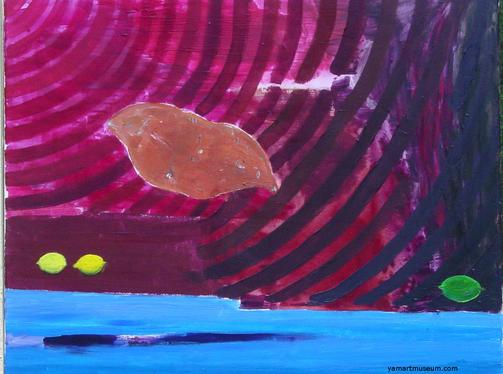 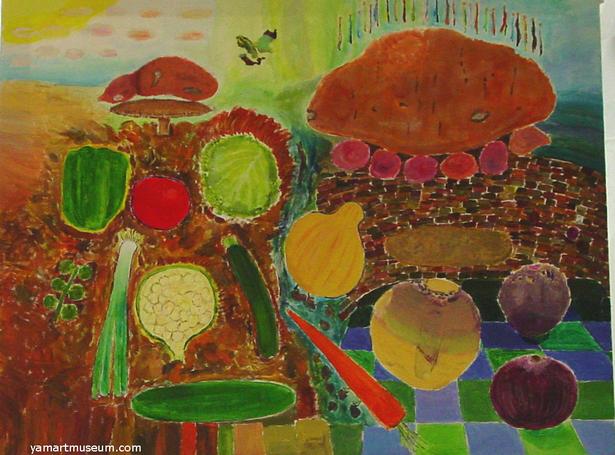 (Transgender Issues in) The Vegetable kingdom

24x30 King Yam sits on a bed of red bliss potatoes and rules over the root vegetables. Queen Yam sits on a mushroom, looking after her salad greens.
But the carrot wants to join his sisters, and the gourd wants to join her brothers!  They have each grown little feet for that purpose.   Is that a butterfly, or a hawk eating a squirrel? 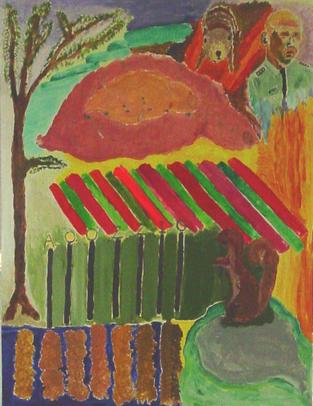 The heavens are ablaze with glory as this yam bursts forth fully formed from an eggplant, as witnessed by a retinue of fruits.  With thanks to my friend Jim Houghton.  Fall 2008 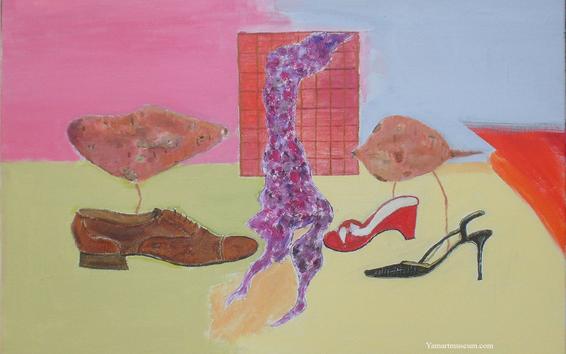 In honor of a trip to the theater with our friends the Field-Neelys, to see Wendy Wasserstein's great play "Third".  Nancy was wearing a pretty blouse, which I wanted to paint as a dividing curtain.  But it turned into a headless giraffe doing the Watusi. 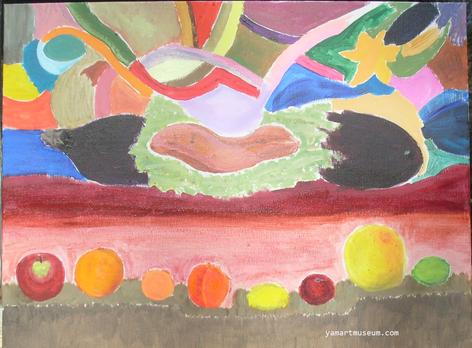 how bad i yam

Based on a real event.  Five local yokels are in trouble for driving around with a pipe bomb in their trunk. They just liked to see things go boom.  Still in the pokey.  Stupid, definitely, and maybe even terrorists?

Thanks to my friend Susan for the better title. I was just going to call it “The Bad Yam”.  Nancy says the big one on the left is “the best yam ever” 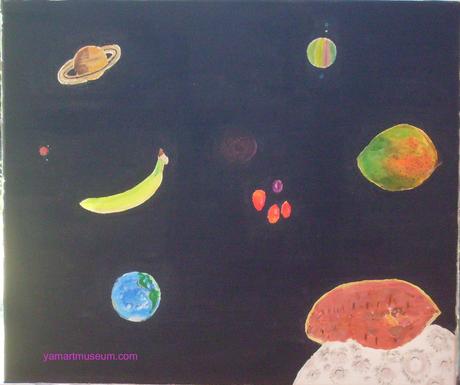 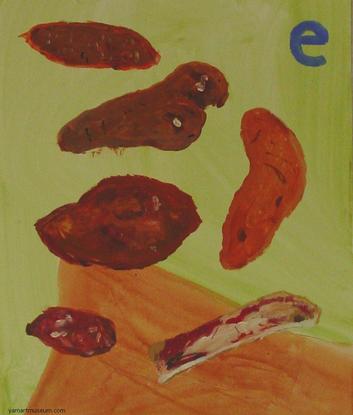 Diptych   18x24  In honor of the twin East Bay cities.     The gate opens to a castle on a hill, speaking to the inner richness of this Yam. 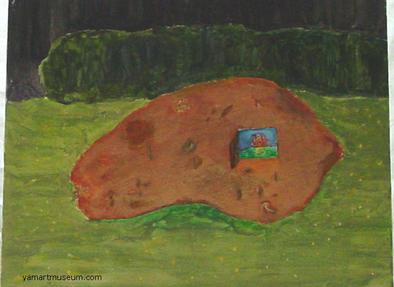 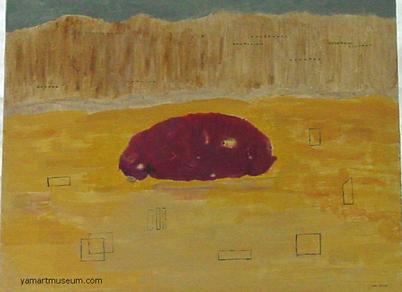 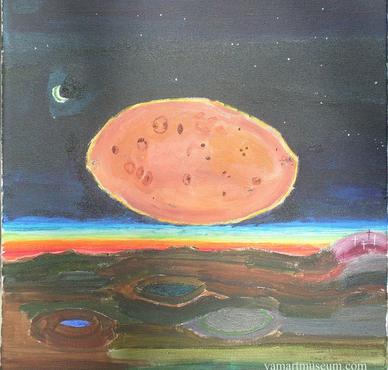 the squirrel is making strange noises

This little critter is standing on its hind legs and saying "A-O-OZZIG".  I don't know what that means.  But the painting is in honor of National Guard troops serving under trying conditions in Iraq, as the military figure is their commanding general.  May they return to the land of squirrels and sweet potatoes soon. The Yam, which is in the painting but does not participate in its action, is a double rendition of the same yam.   24x18. 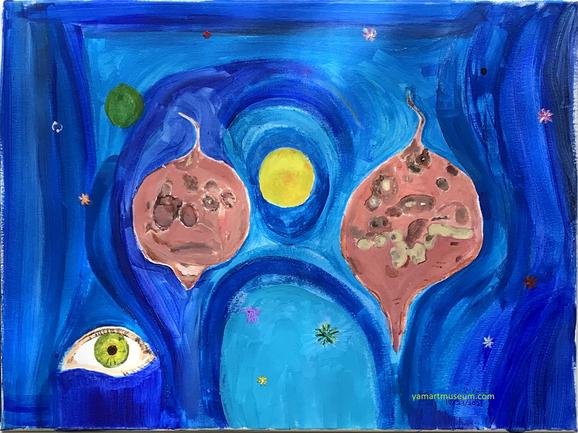 Yams in Orbit starts in love

​Once upon a time, 8 billion years ago, there were two baby stars that condensed from a big gas cloud, their nuclear fires igniting at the same time as they spun around each other, moving a tiny bit closer together each turn. As time passed, they had lots of planets revolving around them, and even one in the Lagrangian point between them that always stayed in the same place (center grapefruit).  As their fuel ran out, they became red giants (bye-bye inner planets) and then blew up as supernovas, leaving twin neutron star cores, still orbiting each other but now much faster and closer, eventually spiraling into each other (top left) at breakneck speed and spewing out a huge amount of gold as they merged into one bigger neutron star, or more likely a black hole (top right).  Finally, truly united and forever together as one.  Check out these amazing merger movies:
http://compact-merger.astro.su.se/movies.html

I grew these two yams myself !  Because of their massive greatness, I am showing them full size in the main gallery.

24x36 Dec 25-31 2013.  I had not planned to make this painting, but came across such an amazingly big yam at a specialty food market that I felt compelled to paint it. A gift! 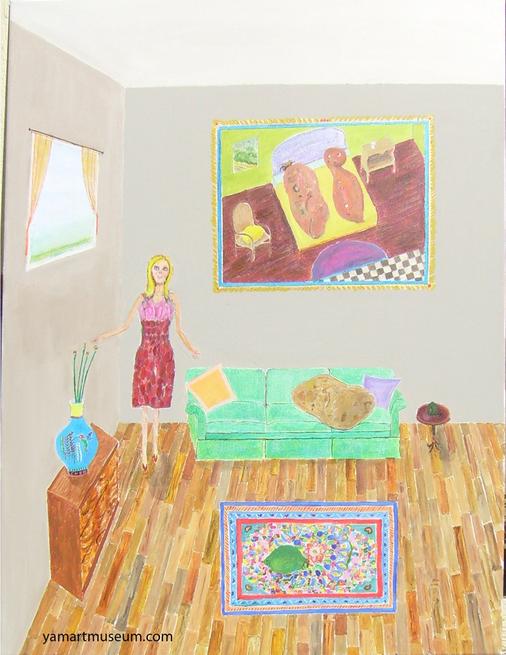 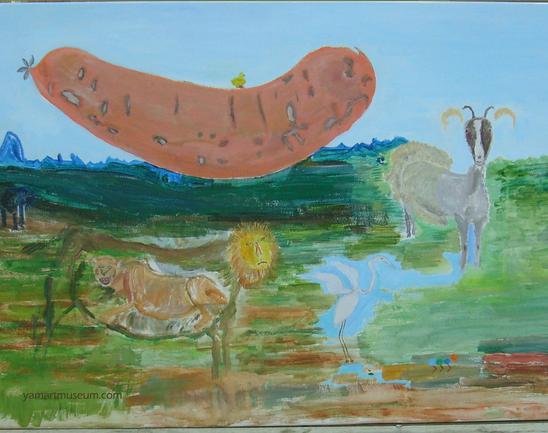 It's really a goat.  But it is becoming a ram.  The yam is unusually orange and is from Alabama.  It grew a propeller and became a blimp, piloted by a rubber duckie.  The lion ate a lioness and became a cow.  The cootie is trying to avoid being eaten by the heron. 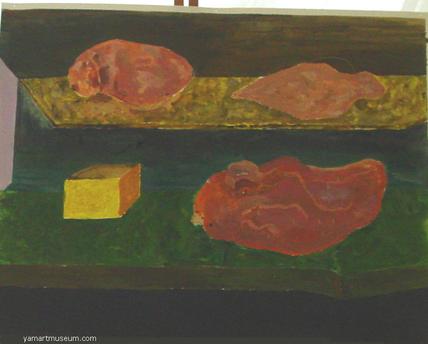 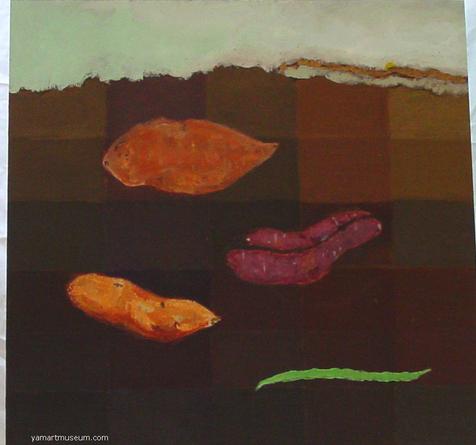 20x20  This highly pockmarked yam is from North Carolina and was shaped like a kidney bean.  The painting is a synthetic view of both sides at once.
May a moody baby doom a yam?
Not this one! 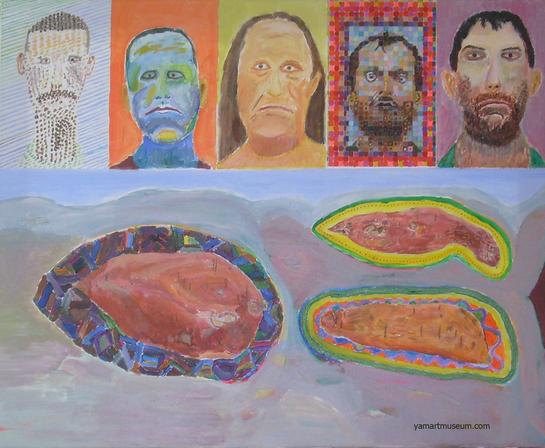 This was my first Yam painting.  The bottom one is actually a boniato and is next to a rib.  The second one looked like a bird.. 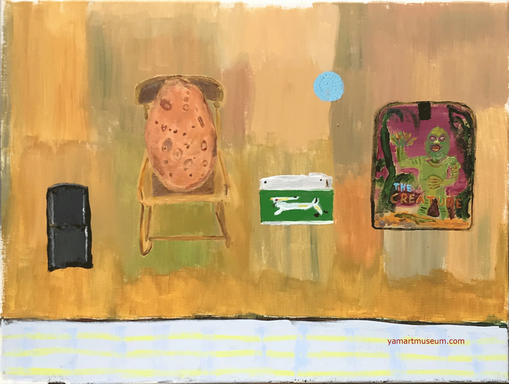 with yam and planets

Five things (3 people, 2 vegetables) that have very little in common, yet all fit together in a strange way. I bought the Yam and even grew the Zucchini. Unlike Manuel Noriega, who is profoundly influenced by the Pineapple, neither Glenn nor Chuck Close have anything in particular to do with yams, either in appearance or personal mannerisms, as far as is publicly known.  However, it is through the nexus of this Yam that they may be compared and contrasted.  I admire both the artistic accomplishments of Chuck and the film career of Glenn (even if I constantly confuse her with Cloris Leachman, another fine actress). The Panamanian history of the late 20th century not so much, although I always have liked pictures of Manuel.  Here is a small-scale modified reproduction of one of Chuck's largest and most famous works, along with two images from one of Glenn's best movies, the 101 Dalmatians, in which she plays a female Devil.  Noreiga was a prominent male devil as far as President Bush Daddy was concerned.  Chuck has influenced my painting style of squares with little squares inside.  I cannot copy his more complex pixelated mosaic style, although you may try per these instructions: https://www.tes.com/lessons/JrlVF3FrZ2fahg/chuck-close-style-portrait-painting

The hyphalosuarus is an aquatic dinosaur. There are two flanking the Yam, and the top one has two heads, one of which is in honor of Loretta Reisberg, a fine Southern lady.  The yam itself is an idealized, platonic form, totally without blemish, and painted from imagination, not a real model.  20x30  May 2014

Three Yams and a Cornbread

​ In honor of the great 18th century French portraitsandstilllifes.com artist.  The top two yam models looked like a walrus and a seal. The bottom one looked like a big submarine.   19x24

This yam had pronounced scars.   Originally titled "Mortified Yam", then "Mollified Yam".  The scowler is one of President Trump's security guards at his SOTU address last year who had an enormous frown.  The biplane is an allusion to the 1918 pandemic. The green curved bananas are really just shapes. 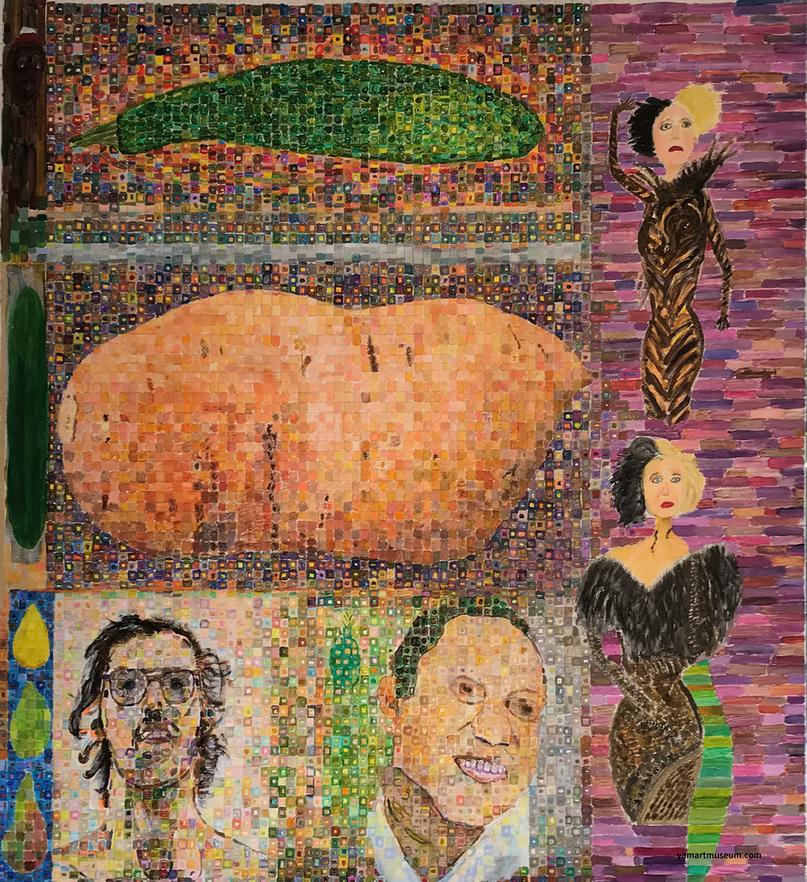 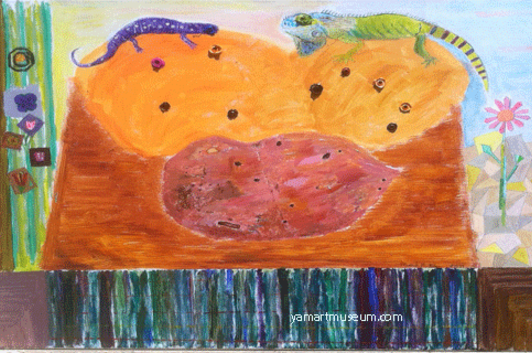 Inspired by Hunt Slonem, interior decorator to the stars, who has the biggest studio in NYC, and who paints birds, butterflies, and rabbits with great gusto. Hunt is a larger-than-life flamboyantly-dressed man, and I have selected a Yam with the same characteristics. It has  bulging veins and is a bright florid pink. Above it is a boniato whose surface is a veritable war zone, covered with scabs, scales, and mottled purple coloration. Most root vegetables are happy to live underground.  Not this one. 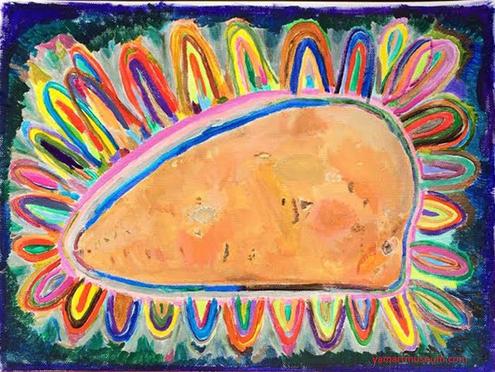