Based (loosely) on the flood of Sept 8, 2004, as beautifully photographed and reported in the New York Post. This is West Broadway near Canal St.   The bus perspective is backward. 19x24 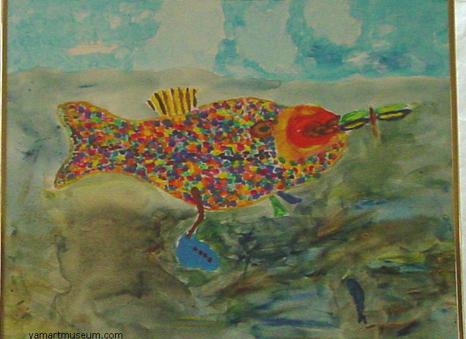 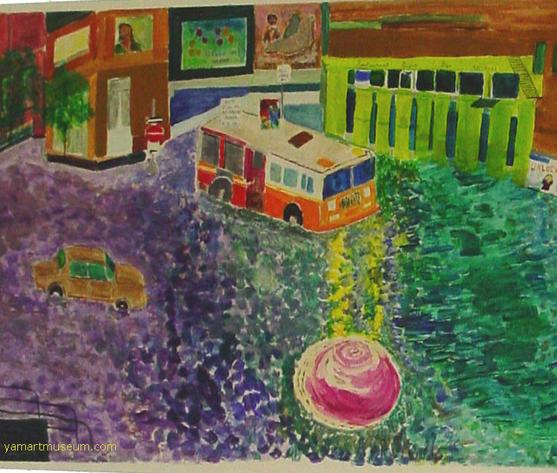 newest paintings are usually at the bottom!
And they are still all acrylics, not watercolors.
This gallery has paintings about watery subjects. 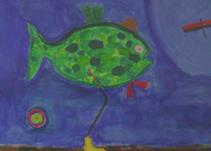 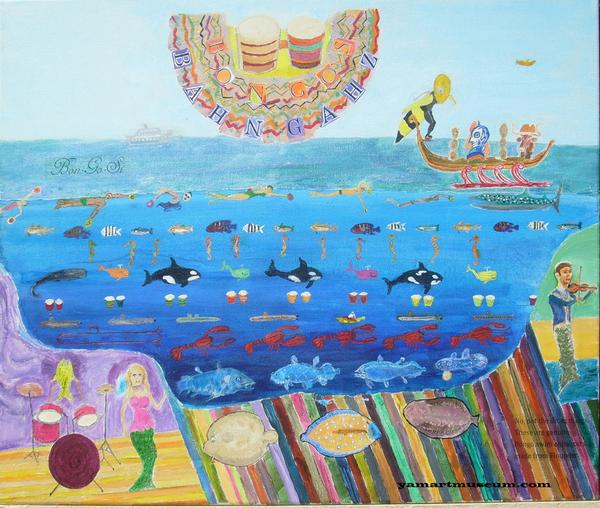 There is a lot of detail in this painting.  On the upper left, a ghostly ship.  On the upper right, a college football boat has the Duke blue devil, Bevo the Texas Longhorn, and two peanuts, with Buzz from Georgia Tech as the helmsman.  In the center, a big hallucination. The sea creatures, in layers from top to bottom, are swimmers, little fishies, seahorses, orcas, bongos, submarines (the Beatles’ Yellow), lobsters, and coelocanths,  including a newborn one with yolk sac. The swimmers wearing bongos are rapidly approaching their destiny.   Pamela Anderson has become a mermaid and is dancing to the beat of a tuna.  Brad Pitt has become a violinist merman. Making cameo appearances are the Little Baby Whales and the Campy Ram’s Yam.   24x30

Based on the dream of 11/22/2005 with direct quote therefrom:  “No, not the drum things.  These are genuine Bongo swim enhancers, made from Flounder”, proclaiming the notion that bongos are really flippers for the hands, made from hollowed-out flounders, that you put on to swim faster.

White Girls on the Beach

(Richard Nixon on the Beach)

Go into any art gallery in the major tourist art market cities, (Charleston, Santa Fe, Laguna Beach, etc) and you will see paintings like this. Tanned, preteen girls standing in or near the surf, with waves crashing in the distance or receding into the sunset, wisps of blonde hair tossed in the breeze, maybe a sandpiper or two, all very stylized and upper class lifestyle-ish. So here is my version, with their parents. Except this is 1953, and the man is the newly-elected sitting Vice President of the United States, with his dog Checkers and wife Patricia Nixon. The larger figure on the right is "Slacker Nixon" just hanging out.  Note the Yam buried in the sand lower left. 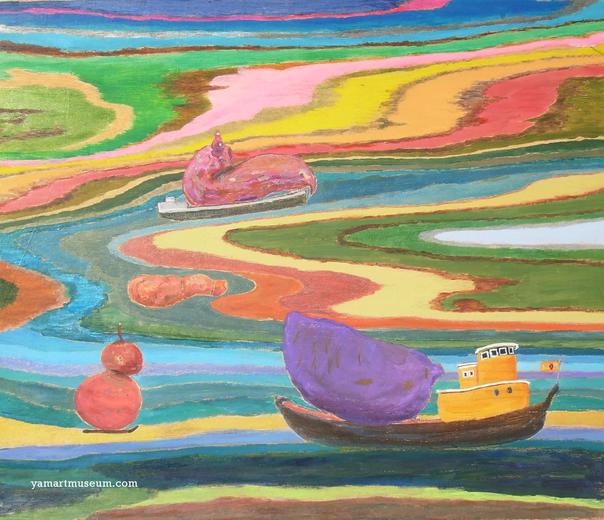 study for fish with booties

This is without question the ghastliest Fish to appear on canvas since Chardin painted his hideous Ray.  But it is significant for being the initial, albeit obscured, vision of the great work to come.  16x20  1999 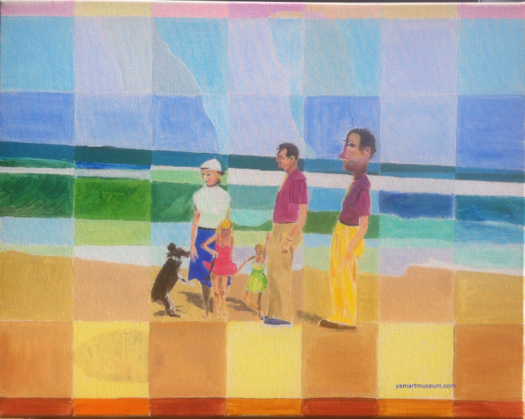 24x28  December 2011In keeping with my naming convention of an "-ig" suffix for things that hold yams, I had planned to name the boat "DALMOSOSSIG", and there were supposed to be two signs on the left, a triangular one that said "EM" and a rectangular one with the word "KEWGIE". And this should tell you something about the flag. But I decided not to not to put all this stuff in at the last minute, because the painting was more poetic and tranquil without it. The center yam is buoyant enough to float without an inner tube.