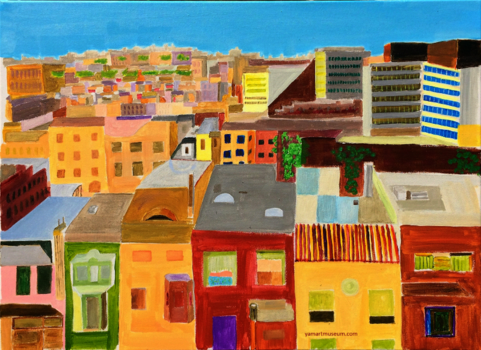 I'm having a great life, full of richness and wonder, ha-ha!  Same as yours, probably. 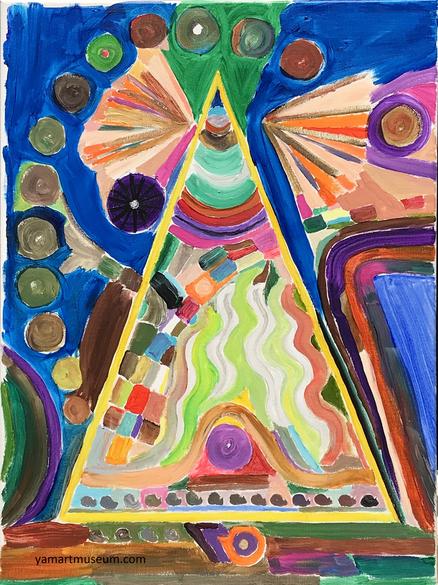 When our dad passed away (just a few weeks before the Queen, and this is also in her honor), one of my sisters had a series of intense visions from the Beyond, to her surprise.  This is my depiction of what she described, 18x24 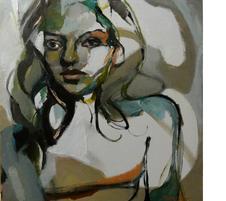 What's with all the crazy language on this page, little fishie? 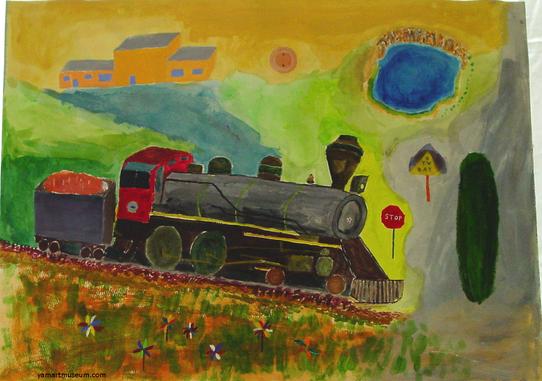 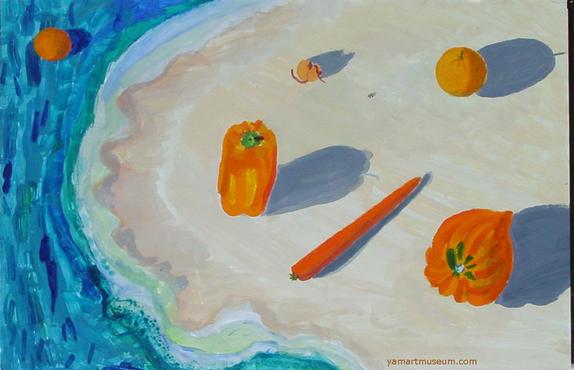 Froggie speaks with a forked tongue.  That's Y everYthing she saYs starts with a Y.  The man is earnestly beseeching her advice.  This is dog language, as opposed to egg language.  I don't know what the words mean, but if he listens to her, he will be happy enough to do handstands.  Otherwise, he is owl food.  24x24
​ yo-bagYAM-BOG   yippodog   hie-ka-chole-lee?YAMULO-DING! 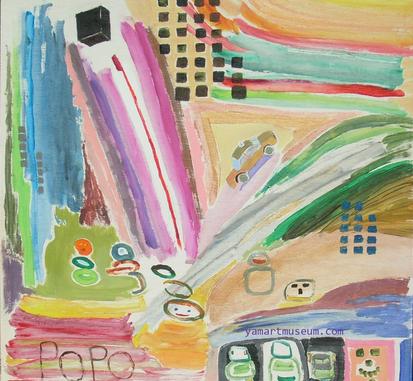 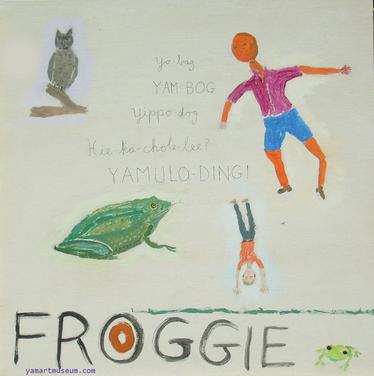 The unmarked police car is leaving as the robots arrive.  24x24

Tribute to Modigliani, the Horse is by Remington

There was a photograph of a man sitting at a drafting table, on a stool.  I liked it so much I wanted to repaint it all in yellow.  I thought the man was Modigliani. Later I learned he wasn’t.

His eyes are three different shades of yellow.  Her nose is a jalapeno pepper.  29x23 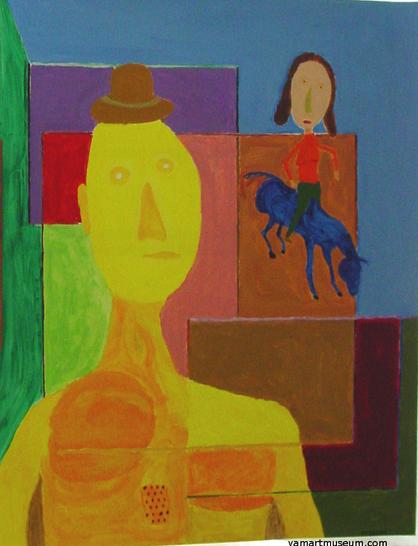 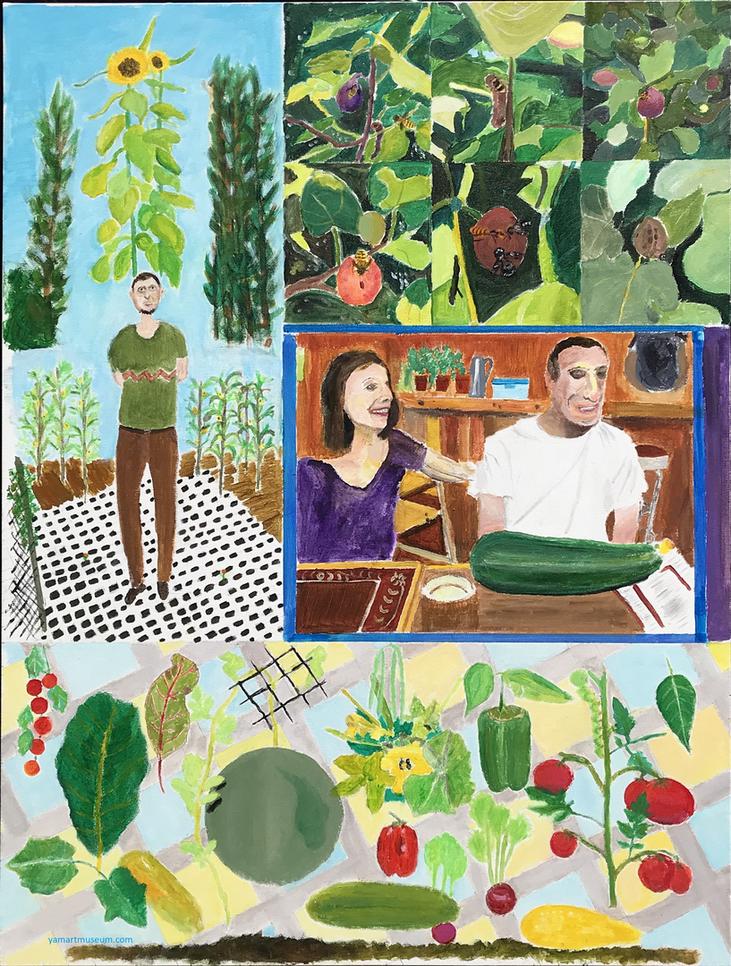 On the night of 10/3/2021 I was too obsessed with the phrase “me-oh-my-oh-moo cow” to fall or stay asleep.  And five days later, I had a vivid dream of a trail with multicolored railings coming down a mountain.  Hence this vision of a bus that has become a cow.  On the back of each seat is a pig-shaped steering wheel that goes oink when you press it. 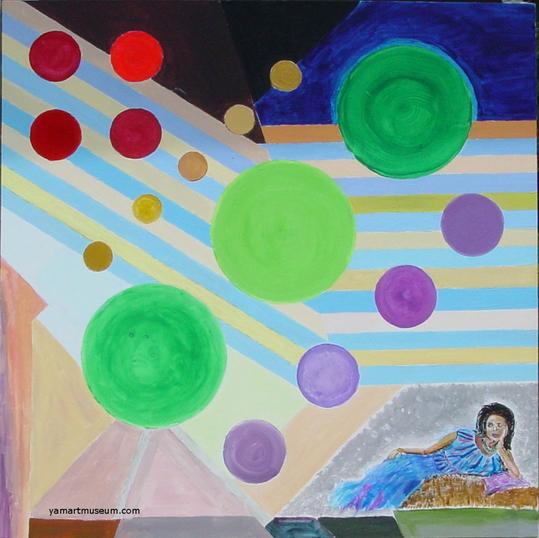 Are they coming for her, or is she just watching them pass through?

In honor of the American Society for Classical Realism and its distinguished patrons.  16x20 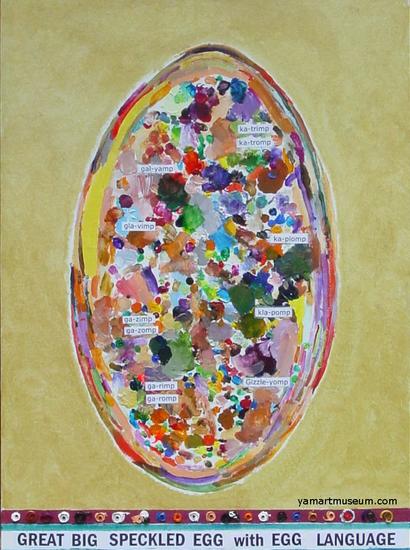 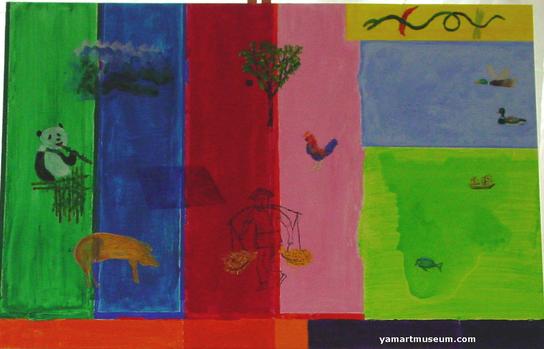 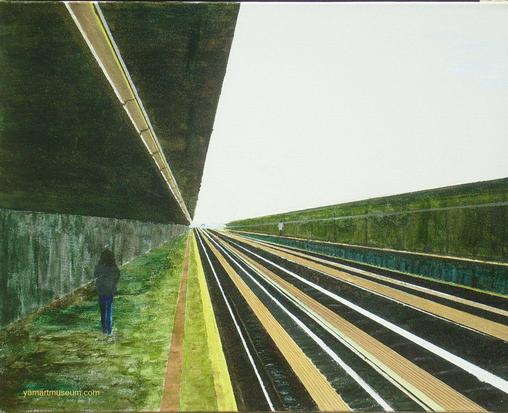 Strange Things in the Garden  24x36 2022
I have a massive old gnarled fig tree that supports every last bee in a 2 mile radius, including many species normally not found in an urban setting. Come early August, they swarm in a feeding frenzy in my back yard, devouring figs with a ravenous humming sound. No delicate brushing of stamens for pollen, these animalistic apians are ripping flesh off the fruit like it was raw meat.

I am blessed to have two sisters – this is the younger one -, and a brother – this his son, who shares a birthday with the older one.  On this happy occasion in 2013, we are having dinner at the Purple Yam restaurant in Brooklyn, NY, and I have just given him a massive zucchini from my garden, even bigger than the one in CUY.  He said, “Gee, this is the first time I have gotten produce for a present!”

This incredibly stupid watermelon thought it was a bean so decided to shape itself into a bowling ball and grow on the fence, instead of in the patch, commingling with yellow cucumbers.

A 10-foot tall sunflower towering over okras, me, and everything else. But instead of a self-portrait, I have chosen to honor President Zelensky of Ukraine with a bright blue sky and intensely yellow sun(flower). 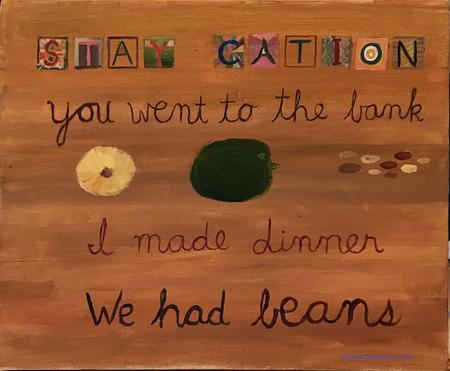 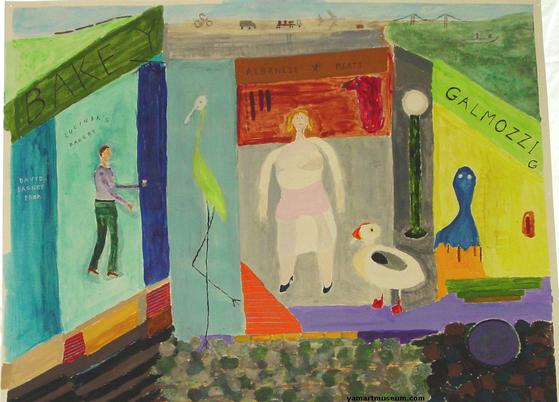 another tribute to lower manhattan

Inspired by the Butcher, the Baker, and the Candlestick maker. The latter has become a ghost upon seeing the puffin.  The tall bird is a cormorant. Painted Spring of 2002. The  bakery is Lucinda's Bakery, run by David Dagney.  If you think the Albanese Butcher's pink underwear violates the Museum's no nudity policy, no, I was trying to achieve the layered look.19x24

stop or you will become a yammig

Yam’ mig adj 1. literal but rare: The conversion of a locomotive into a cucumber, as in "become a yammig". 2. idiomatic, colloquial usage: representative of a small dog that thinks it is a big dog. "Bunch of yammigs", "That was a yammig movie". Yom' mig adj 1. Pertaining to something that really is a big dog, as opposed to a yammig. Cf yosmodog, the superlative form.  18x24

Stylized, stereotypical Chinese images, harmoniously arranged.  The primary point was to have a red stripe next to a pink stripe.  The world's skinniest dragon top right.  20x30 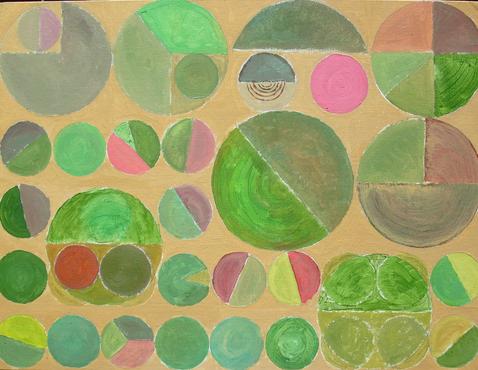 The first title is from a dream.  I don’t know what it means.  Upon awakening, I immediately started calling it by the second title.  Teamer as in lemur, but temeur as in demure, or obscure. (Not Demi Moore, who is neither).  Much better than “cityscape”, temeur invokes the Central European feeling of Washington DC that I wished to convey.  The view from room 815 of the Hilton hotel on Mass Ave. 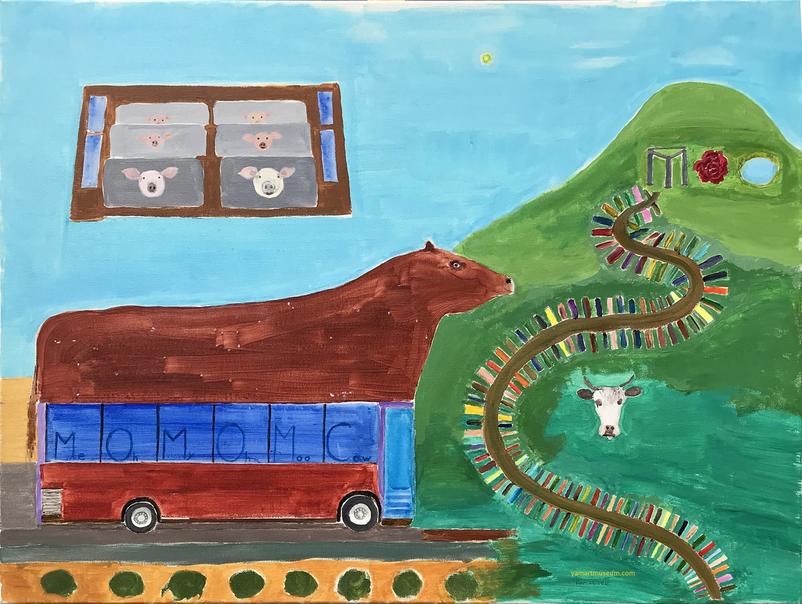 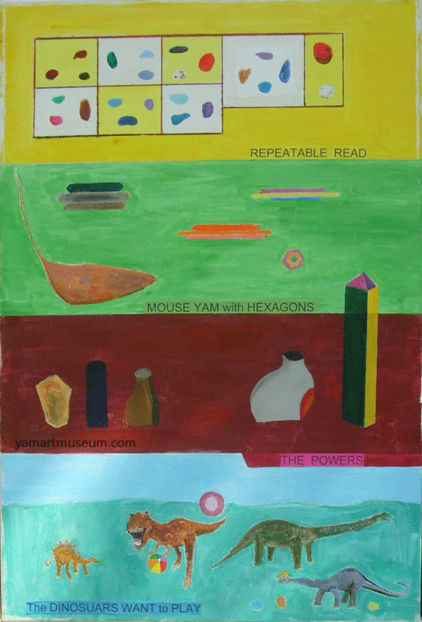 24 x 30 June 2012  A reproduction of 4 Little Weirdos, on canvas and slightly larger.  It has the Mouse Yam, which I discovered in Burlington NC on Mayday when I was helping a little old lady pick out sweet potatoes for her dinner. Also the bottom panel is transformed.  The canvas was originally intended for Cousin Bernie, but it was too small. 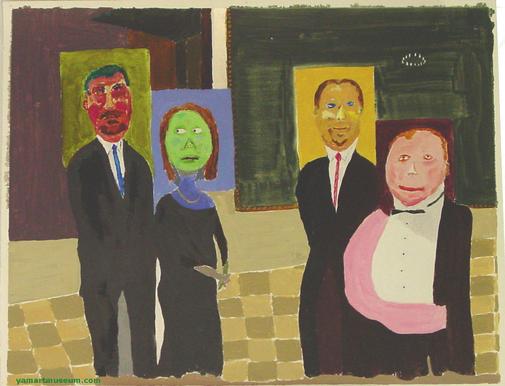 my favorite spot on earth

the avenue i train station

To prevent overcrowding, Vegetable Beach restricts admission to a different color of vegetable each day.  The orange gained admittance on a technicality.  "Hey, today is Orange Day, and I'm an orange". But the tangerine did not want to risk the worm police, after seeing what happened to the foolhardy apricot.  Also notice the remnants of a grape.
As originally conceived, this picture was vertical, not horizontal.  There was an ocean to the left, and a city to the right, of the beach.  Fruits were welcome guests, and cooling polka dots were rolling off the sea onto the land.  But I realized that without my intending to, the sea had turned into a four-eyed worm eating Michael Quigli's grape!  (See 2WOIQ.) This led to notions of property rights, arbitrary property rights, trespassing and the consequences thereof, as expressed in the final version, which has a more somber tone than is usual in my paintings.  (Michael Quigli and his ridiculous grape are completely fictitious, although there are several real Michael Quigleys.)